In-ear monitors are one of the biggest modern technological developments within live music performance.

When performing on-stage the sound is outputted to the audience, away from the performers, which means without monitors the performer can often struggle to hear their own performance.

A monitor is a speaker that faces away from the audience towards the performer and allows them to not only hear their performance but decide which vocals or instruments they hear in their monitor and the level at which they can hear each channel.

Floor monitors require direct communication with a sound engineer to alter the levels to your specific requirements.

However, when playing in a large band or when moving around, floor monitors can be restricting as you have to be in front of the monitor to hear the audio.

In comparison, in-ear monitors allow performers to move around the stage and guarantee that the only monitor they hear is their own.

So whether you want to keep a keen ear on your own performance, or you just want to walk into the middle of the crowd and crank that guitar solo, in-ear monitors are the purchase for you.

Unless you’re a sound engineer, knowing the right tech to buy can be a confusing and patronising experience.

Below, I’ve laid out the best in-ear monitors on the market and simplified the jargon-filled world of sound into the most important features you need to get back to performing as soon as possible, armed with the best gear on the market. 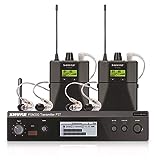 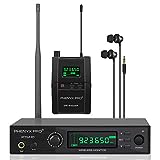 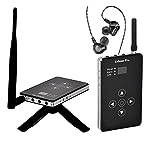 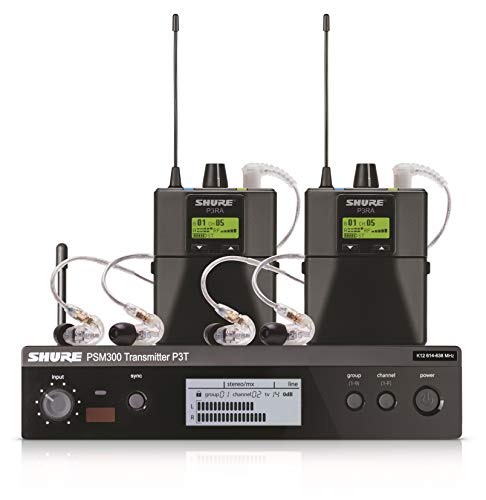 Shure is renowned amongst sound technicians as one of the highest quality brands when it comes to monitors and general sound gear, especially for an entry-level in-ear monitor. This in-ear monitor system is one you can trust to do the job. 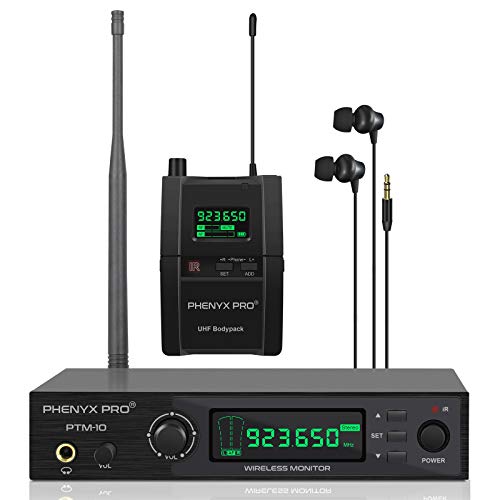 Phenyx is another home-brand when it comes to sound engineering. The PTM-10 provides the performer with more accurate information on levels etc. than other brands. 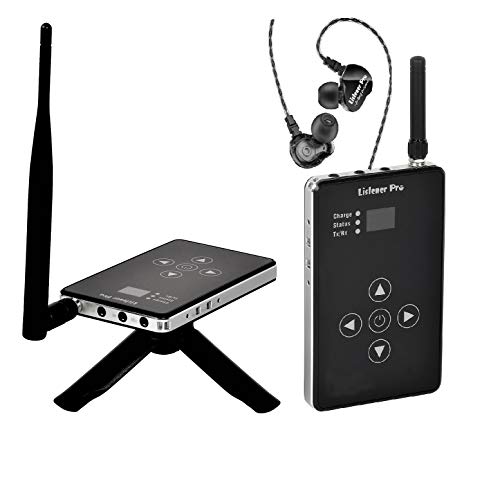 The Listener Pro is a new and non-traditional system that has some differences to other brands that can be of benefit to a certain performer.

Rather than having the static box for a transmitter, the Listener Pro provides a 2-in-1 system where you get two units that look the same, but both have a function to become a transmitter and the other a receiver. 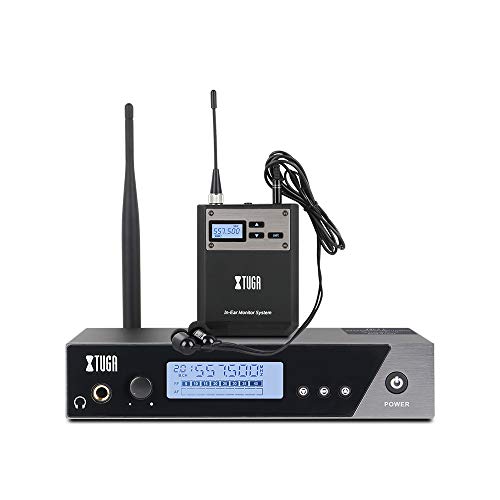 Similar to other brands, The XTUGA IEM1100 reliably focuses on the features which matter most. 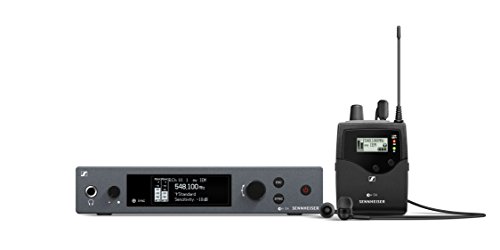 Sennheiser is another top brand that’s trusted among sound engineers and performers alike.

Once you have your chosen in-ear monitor system an important next step is finding in-ear headphones that are of the same quality as your system.

As detailed, these systems often come with their own in-ear headphones but the default headphones that come with the system can often lack the quality of comfort and sound that performers need.

If you are planning on walking around and being active in your performance, or even if you’re using your system in a lecture setting, comfort can often be really important in longer performances.

The last thing you want while performing is your headphones falling out or causing you discomfort.

You want your performance to be as unimpeded as possible so it’s important to not overlook the quality of your headphones.

If you are considering upgrading to an in-ear monitor system then it’s crucial that your in-ear headphones actually have the hardware capacity to get your monitor system at peak performance. 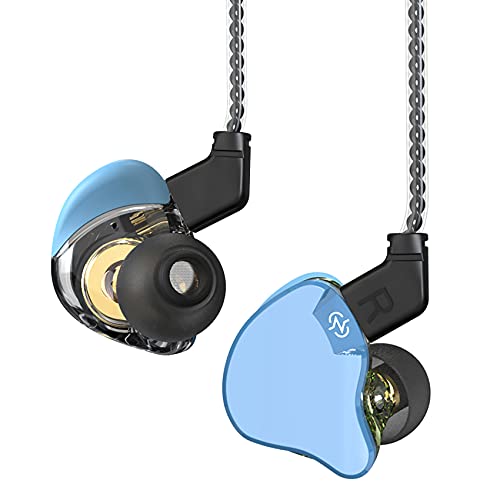 Yinyoo are a quality brand that with a focus on comfort and universal use of their headphones. They also pride themselves on focussing on design as well as performance, so if aesthetics are important to you as a performer then these are the headphones for you. 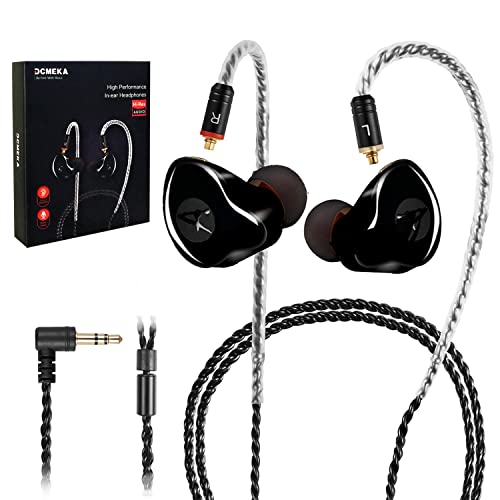 While not necessarily a name brand these in-ear headphones provide the same level of sound quality and comfort as other brands do. While other brands focus on being fashionable DCMEKA’s design focus is being undetectable to the audience. 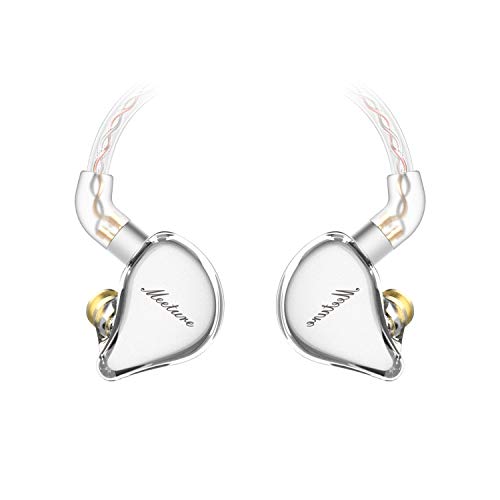 SIMGOT are a brand that focuses solely on producing quality in-ear headphones, so you know that their product has gone through rigorous engineering for its purpose. 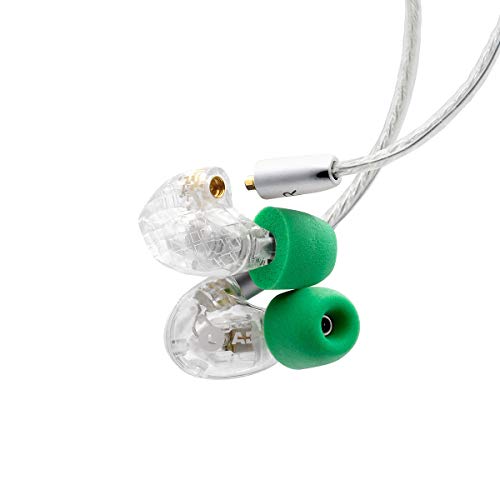 ADV have engineered these earphones to set them apart from their competitors, so if you’re looking for something a little different than the generic design ADV’s earphones are for you. 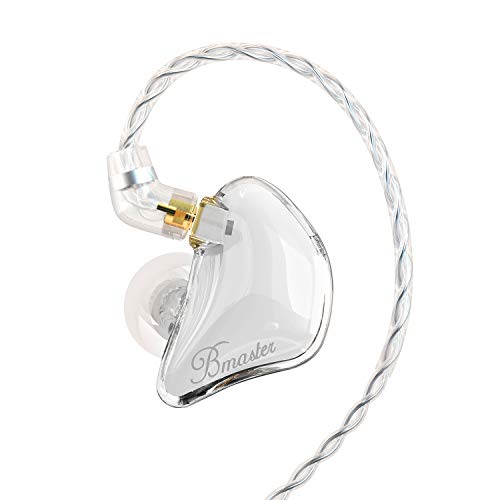 The BASN Bmaster headphones are at the high end of the market attempting to be the best earphones for the audiophile. The Bmaster’s prize feature is a triple driver system that provides an enhanced bass sound which is desirable for specific performers.

A wireless in-ear monitor system will generally consist of three products: a transmitter, a receiver, and earphones. Jargon aside, these products are fairly simple.

The transmitter is a static box that usually sits next to the performer and wirelessly sends a signal down a channel to the receiver.

The receiver is often a small portable piece of hardware with an antenna that can be attached to your body which receives the signal from the transmitter.

The receiver is the main piece of kit to focus on as its features allow the performer to control volume and ultimately receive a signal wirelessly which allows freedom of movement.

So when it comes down to the features of the whole system the main thing to look out for is the frequency band, which decides how far away from the transmitter you can be and still play through the system, the comfort and ergonomics of the receiver, and ultimately the battery life of the receiver, which is often the biggest problem with wireless systems in general.

Earphones are often overlooked as an important piece of gear, but if your headphones aren’t of the same quality as your system then the sound quality generated, not forgetting your money, will be wasted. Monophonic (Mono) systems only use one channel to convert the signal to sound. Stereophonic (Stereo) systems use multiple channels to convert a signal into sound which results in a much wider and dynamic output of sound.

While sound engineers might tell you differently, mono and stereo aren’t necessarily better or worse than each other; they just sound different and use different technologies to produce sound in different situations.

This is another piece of sound technician jargon but is actually really simple. The driver is the physical hardware that receives the sound waves. The specific engineering of a driver essentially modulates how the sound wave is felt in your eardrum.

Next time you see a sub-woofer watch how the driver vibrates, the movement you observe will be identical to what your eardrum will look like while listening to that sound.

Do I Need To Be A Sound Engineer To Use An In-Ear Monitor System?

No. In-ear monitor systems are made to cut out the sound engineer. While this might annoy your sound guy it ultimately means you have more control over the sound that you hear.

Many product descriptions can be filled with jargon but in the long run ‘sound’ is a subjective idea and is specific to the kind of music you perform.

Are In-Ear Monitors Supported By All Venues?

Of course, whether you’re touring the world or playing at your local church every Sunday, in-ear monitors will always work. Just talk to the venue sound engineer and explain your system and they will be happy to link your system with their PA/Mixer

Do I Have To Be A Musician To Use In-Ear Monitors?

No. Many people use in-ear monitors for things like lectures or public/outdoor speaking. Just check whether your system has a microphone input or even if your in-ear headphones have an in-built microphone.

If you’re just in the market for in-ear headphones their portability and mobility are useful for runners and studio users alike.

Is A Sound Technician And A Sound Engineer The Same Thing?

Yes, these are just interchangeable titles. They are often referred to as a ‘sound guy’, just don’t mix them up with a roadie!